Testing the waters of Lisp

June 23, 2016
Lately, I have been exploring Lisp, Common Lisp to be more exact and I have seen some of the stuff ways out of imagination. I am going to talk about two such feature here.

The next three paragraphs are giving the background of my relationship with programming languages and Lisp. Feel free to skip it and bite directly into the juice.

I can code in few languages and they belong to a wide range of paradigms. The first language I learned, in what can be said in depth was Java. I learnt it in my high school and later the deeper stuff in the first year of my college. I have also explored Ruby, Python, C, C++ and a few more languages. Having explored all these somehow made my perception of computer languages different. I could see the good points and bad points of all those languages and only opinion I had about languages are they are made of different kinds of stuff for different reasons and they are beautiful in themselves. And obviously, I either stayed out of language wars or supported both of them (more former than latter).

Almost exactly a year ago, one of my senior at college (Divij, for those who are interested in the name) posted a link of Paul Graham on Lisp in SDSLabs' slack chat. Being a "language neutralist" I was really marveled how can one so confidently claim that this language is a superior language. I have had heard such arguments before but what struck me was the example of the hypothetical language he gave. So I decided to try out Lisp and see what's all that people going crazy about.

I didn't just sit down and learn the language from top to bottom (I was too bored of learning languages ;) ). I explored it in parts. I read up Practical Common Lisp by Peter Seibel. Not fully, but I completed the language section and up to half of the practical sections.  Was not able to give to time to the rest. It was great experience mostly the macros and restarts. But I was not in full awe because I hadn't experienced them by myself.

That's the boring background, now let me give you the real juice!

The first time my jaw really dropped was when I was able to dynamically alter a running program from my text editor. If this didn't sink in, let me elaborate. I was in my text editor and I could alter the program running on my terminal without restarting it or loose any of my data (unless of course, if I change the data directly and yes, that also could be done). Isn't here development cycle cut right into the half? Just change the block and try. No restarting and setting up the data again. Well, actually that was the magic of SLIME and swank server but nevertheless, Lisp tools and the power of such flexible REPL.

So what I did was start the swank server with my program. Then I connected to the server from Emacs' SLIME instance and I was right in the REPL of the running program. I could modify the code in the file I was editing and sent it to REPL. Then from my next command on wards, it behaves differently. That's it. Isn't it cool? It was something like Ruby's pry, but instead of the terminal, I was in my text editor, editing the source code directly and without adding any special line in between my code. I know there might be more elegant way to connect but that's how I did it.

The next surprising thing happened today! I was trying out Woo webserver and it has a dependency named libev (an event library). I thought that it might already be installed on my computer so I tried to load woo directly though quicklisp. (quicklisp is another great dependency manager in CL toolbox, but this post is not about it). As this was the first time I was loading woo, it started downloading it and building it. Then in the middle of the build process, it realises that I don't have the dependent library. So, what do you guess happened? My program crashed, I installed the library and restarted the program, right?

Nope, it didn't happen! What happen was that, when it realised the it doesn't have the dependency, it paused and gave me 14 options to choose from. They ranged from try again, use another library, try recompiling the effected part to give up on woo. 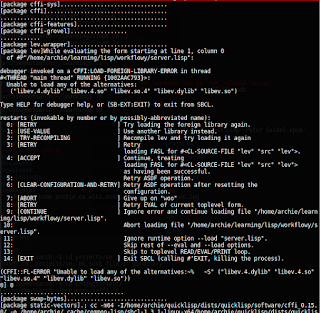 So I decided to give it a try! I fired up another terminal, installed the library and chose the option to retry loading. And then my jaws dropped. I went on smoothly. And then I had the same expression of Janice in F.R.I.E.N.D.S.

It's a sad thing that such a cool language and such cool features are not in mainstream anymore.
Emacs lisp programming restarts SLIME swank

Popular posts from this blog

Here is a new and easier way to setup your Google Account to receive free and automatic SMS notification to your mobile for new mails in your Gmail Inbox. (Steps to setup only for Priority Inbox(Important Mails) is also provided .) Hey there may be many reasons why you need SMS notification for your new mails in your mailbox. As usual, Google does not fail us in this venture also. Although Google does not provide us with direct service for SMS notification of our mails, but there is a way out of this using the calendar remainder via SMS. My approach is not new. In fact if you Google for it you will get hundreds of such ways. But I found out that they all were almost the same and a little tricky to setup (although not for techies, but for common men). So, I spun up  a new and easy to setup method for it. It does not require any Gmail filter setup or any manual setup for remainders. All you need is to setup your mobile number and the script triggers. What it does is that it check
Read more

December 30, 2014
Blabbering... You can skip it Hi buddies ... Sorry for no being able to post any blog for a long time. There were so many topics on which I wanted to post and so many newly gained knowledge that I wanted to share, but I was not able to gain the permission of long standing and ever persistent time. My new college, new friends, so many things to learn, so many things to know about and without forgetting, for my vested intrest in literature and cinematic, watching movie, tv shows and reading novels, kept me engaged throughout the half year! The one thing I realized that computer science is a vast domain and the is always so much to learn!!! Well as the title goes here I am to talk about my second full fledged program. Ya, second, my first was a simple paint program, developed by me as an assignment for Xth ICSE Board exam. It is a sad thing that I am no longer in the possession of the source code or the final program, but proof of it is sill buried in the assignment records of my
Read more

Here I am going to describe the steps to install Kali linux with dual boot in UEFI system. Your windows 8.1 installation will not be harmed. Now the computers are starting to have UEFI instead of BIOS. So, if you want to multiboot with your Kali linux then you will face a formidabe problem since the linux distros have not yet fully supported it. --You are free to skip this if you like-- I am not first one to write on this topic and many experts have already written on this. Then why am I writing this? I am writing this because during my research I was not able to get all the stuffs under one hood.I had to work out different steps from different places and then finally I was able to install it. So I planed to arrange all in a sequential manner so to help other newbies. Recently I bought a new lenovo Z510 with Windows 8.1. It has some wonderful features!After spending a week I decided to dual boot it with Kali Linux (I am not a linux pro, just a amature). My first s
Read more